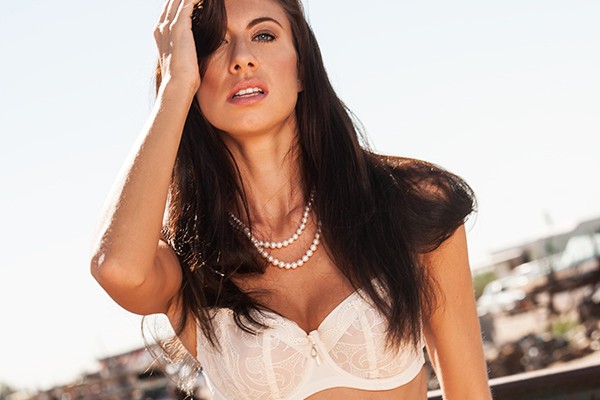 It’s official! GMM has been fully invaded by the British and we’re loving it! Today’s update is Playboy cover model Maria Eriksson! Now don’t let the Playboy covers confuse you, Maria is as intelligent as she is sexy and the way to her heart isn’t by physical compliments. Want to know the trick? Read on! By large and far the most experienced and published Glamour Model to grace the pages of GMM, we are excited to have Maria write several articles for us and educate our viewers on how to progress their careers! Until that time, lets get to know Maria:

GMM: You’re a Leo, how would you describe your personality in that regard?

Maria Eriksson: My brain and intelligence!

Maria Eriksson: Physically I usually get nice eyes, lips, legs, butt, boobs. People seem to have their favourite parts of me!
I also do get a lot of compliments on how down to earth and ‘real’ I am for how successful my career has been. Its nice to get compliments which are not about my looks!

Maria Eriksson: I was scouted as house model for a big fashion label in London.

Maria Eriksson: Yes. Several around the world. I have lived on 4 continents as a model.

Maria Eriksson: The travel! I live for it!

Maria Eriksson: I fell off a prop. I knew it was going to happen so I made it into a backwards somersault to impress everyone!

Maria Eriksson: I would love to do a shoot with the Eiffel tower in the background, on a safari – but I guess the animals would have to be tamed! So I should say a safari themed shoot! I have done so many amazing shoots this is hard but I wouldn’t say no to a trip to Bora Bora to shoot swimwear!

Maria Eriksson: I would like to be moving on with my career. I have been a Playboy Centerfold 3 times now, on billboards, covers of magazines like Playboy and FHM. I have been on runways and done TV commercials… phew! So I hope to just continue doing what I have been doing, but also spread my wings into slightly different areas too. I am currently working on several projects right now.

Maria Eriksson: I am also an experienced TV host and great at ad lib work! This comes from the skills I learnt when I was a high school Science teacher. I also write! I have written columns for the likes of FHM Indonesia, Playboy South Africa and VIP (Playboy) in Singapore. I am currently developing these skills so watch out for more things to come in the near future!

Maria Eriksson: I wash my hair and do my nails the night before. I also always pack a bag the night before too. I hate leaving things until the last minute as being late is very unprofessional! In my bag I take a variety of things depending on the job. Shoes, heels, underwear and more…. I usually also wear loose clothing or clothing that doesn’t leave lines on my skin as you never know what you are wearing or how much skin you may show…

Go fresh-faced with no makeup on and take snacks and water incase there isn’t any.

Maria Eriksson: I have a list of information and advice and get asked questions regularly. That’s why I will be writing article for Glamour Model Magazine to help new models – so watch out for my features coming up soon!

Maria Eriksson: Moving to Los Angeles on my own not knowing a single person! Believe it or not that was actually more difficult than when I moved to Asia by myself!

Maria Eriksson: There are so many! But I think I would look back and say: “Wow! I got PAID to go all of those places!!!” I have been to more countries modeling in a year than most people ever get to see in a life time!

Maria Eriksson: The girl who didn’t let it go to my head despite my achievements.

Maria Eriksson: The nice guys! I like dark hair, a strong  back and someone intelligent.

Maria Eriksson: I think that what someone is like on the inside is what makes someone attractive or not. You could get a gorgeous looking guy but if he is an asshole, arrogant, dishonest and lazy it makes him ugly on the outside to me. The same goes for women!

Maria Eriksson: He should be working, honest and loyal…..and he should appreciates the little things in life making him romantic, sensitive and I have to admit sensual. He should listen to my needs, be there emotionally and prioritise me.

Maria Eriksson: Arms…. and hands too…his back…. I could go on 😉

Maria Eriksson: He listens to you and actually hears what you are saying. Women talk! Men try to solve problems but most of the time women just want to talk it out to feel better. Real women don’t need to rely on men, especially for money, but we do need men to be physically attentive and appreciative, romantic from time to time but still stand their ground! A man keeps me by being emotionally supportive and not controlling. He has to remember I want him in my life; I don’t need him.

Maria Eriksson: I make him feel like the only man in the world! Because to me … he is.

Maria Eriksson: Arrogance and controlling men. Men who condescend and patronize me because they feel they can buy my affections. That will never work with me as I find it insulting that they would think I cannot go out and earn as much, if not more money, than they do! Bad breath, rudeness and laziness are turn offs too.

Maria Eriksson: Took me out in his helicopter to Catalina Island for lunch.

Maria Eriksson: Took me out in his helicopter to Catalina Island for lunch.

Maria Eriksson: Not really – but I do believe in karma and fate….

Maria Eriksson: I have to say Manchester United or by brother will kill me!

Maria Eriksson: I don’t really web surf. I always have focus with my actions. But if you guys want to know more about me check out my website and Wikipedia page!